Religious Symbols and Freedom in Christ 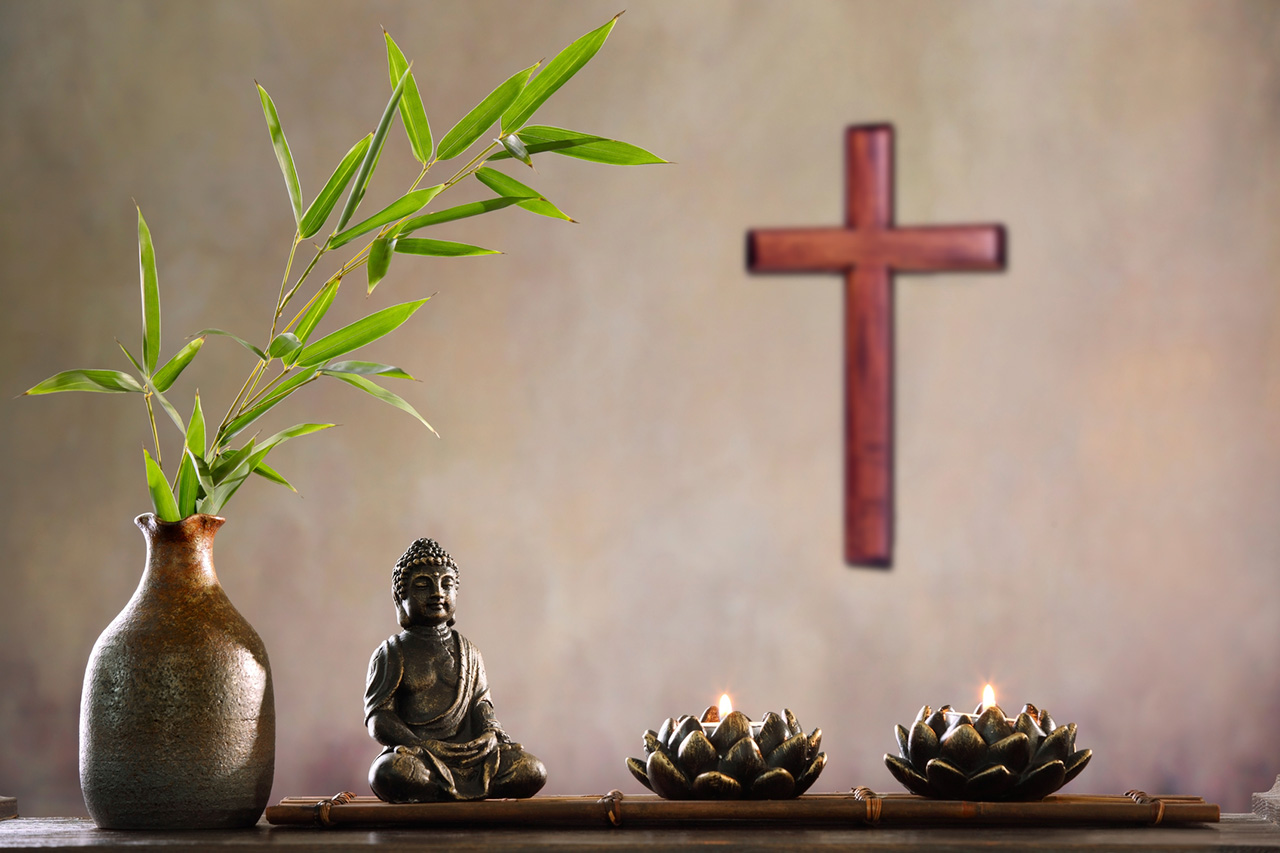 Here's some concern for your advice:

In our house, we have a statute of a sitting Buddha with a beautifully carved face looking very "calm & smiling". It was bought for our new house in end Y2002 as a decorative piece of art. It matches my side cabinet in the hall.

However recently my daughter (18 yrs) said she felt uneasy with the piece and she refers to the teaching on 1 Cor 8: That this statute is a representation of idolatry to others and has negative effect in our spiritual life at home (i.e. it is as the scripture says we become a stumbling block to others).

Hence, I refer to the Bible and read on in 1 Cor 10 V23-32 and wonders if we like the statute as a piece of art, it is against the teaching of the Words of God. Personally I do not think so but my by what my daughter said, it has become a stumbling block to her. Meanwhile I have taken the item out of sight, but pray we could have a better understanding of this and that she is comfortable with it so I could put it back as a piece of art.

(My younger girl, hubby and I were saved this year while the elder daughter was saved for more than 3 years.)

Hope to learn from your wisdom and reveal to God's Words. GOD Bless!

Thank you for writing about this issue. I can understand that sometimes we can be easily confused on what it means to be under the Law and under grace, as well as how our Christian liberty should be exercised. 1 Corinthians is a great place to start and try to sort out these concepts a little more clearly and carefully.

One reason 1 Corinthians becomes paramount in this discussion is simply the fact that members in the Corinthian church were facing the same issues as you. The Christians there understood they had a license of liberty in Christ, but they took that license and they abused it in several ways. Part of the reason Paul is writing is to answer questions the Corinthians had concerning things like eating meat sacrificed to idols. Another reason he wrote is to correct specific errors he saw them falling into through over-confidence.

Chapters 8 through 10 in 1 Corinthians are the primary chapters that deal with Christian liberty. Chapter 8 is mostly focused on public displays (verse 10 "For if someone sees you ... dining in an idol's temple") while chapter 10 focuses on actions in a more private setting, such as your home or someone else's (1 Cor. 10:27). They are tied together by a personal example Paul offers in chapter 9. The main thrust of both passages is the same, however. Paul writes to the Corinthians not to convince them of their liberty in Christ - this many of them seemed to understand - but to enforce the idea that liberty does not exist without its responsibilities.

Warren Wiersbe's commentary on 1 Corinthians does a good job of capturing the four main points of Christian liberty.1 I've summarized them here:

Knowledge must be balanced by love

Although the strong Christians in Corinth understood that there are no other gods but the one true God and that idols were nothing more than wood or stone, they had to be careful not to flaunt that knowledge. They had liberty to eat in pagan temples or purchase meat there, but they shouldn't draw attention to the fact that they were doing so, in case as weaker Christian misunderstood. Paul says "Knowledge puffs up, but love edifies.. Therefore, if meat causes my brother to stumble, I will never eat meat again, rather than cause my brother to stumble (vv. 1,13)". Here you can see the primary concern is to other Christians. Love is the driving factor and Paul calls any freedom that intrudes on the welfare of someone else a sin.

Experience must be balanced by caution

Paul argues in 1 Corinthians 10 that exercising all freedom can lead to overconfidence, and overconfidence can lead to sin (v. 14). None of us are immune to temptation. It is the wise Christian who distances himself from anything that may lead to sinning. We can "try the Lord" (v. 9) by pushing our freedoms to their limits without exercising the proper caution in applying the admonitions of Scripture to ourselves. Paul shows us how Israel had been given great privileges by God as they escaped Egypt, but that did not guarantee their continued obedience nor did it mean that they'd bear fruitful lives. They were required to continually obey God and be diligent about His commands.

Freedom must be balanced by responsibility

Paul also warns the mature Christians at Corinth that "All things are lawful, but not all things are profitable. All things are lawful, but not all things edify" (1 Cor. 10:23). Although we have freedom in Christ, we must also carry the responsibility of exercising that freedom for both our good and the good of others who may not know Christ (v. 24). In other words, although doing something like eating meat sacrificed to idols wouldn't cause us to lose our salvation, we must also be sensitive to how such things affect us spiritually. Does the freedom lead you closer to God or draw you a little farther away? Are unsaved people confused by your actions? Beyond all that, Paul also says that his responsibility is to glorify God, that every action he performs shows his devotion to the Almighty (v. 31).

Authority must be balanced by discipline

In 1 Corinthians 9, Paul shows how he would sacrifice some of his freedom in Christ in order to serve the higher good. Paul, as an apostle to the Corinthians, had the right to be supported by them in his ministry (vv. 1-14). However, he did not demand this support even though he had adequate Scripture to support his claim to it. Instead, he makes the point that "I do all things for the sake of the gospel so that I make become a fellow partaker in it (v. 23)."

Now, to be sure, if Paul received support from the Corinthians it surely would have made his task of spreading the gospel easier. But he chose to sacrifice his own desires to help cultivate the spiritual development of the church. Paul's main interest isn't what he would want, but what would draw him and others closer to God. That's why he writes, "Therefore, I discipline my body [meaning his desires and appetites] and make it my slave, so that, after I have preached to others, I myself will not be disqualified" (v. 27).

So, although 1 Corinthians discusses Christian liberty and outlines the fact that we have great freedom in Christ, it also instructs us to take care with that liberty in which we're entrusted. In fact, Paul makes one explicit caution to the Corinthians in telling them about exercising their liberty: flee from idolatry. In 1 Cor. 10: 14 Paul writes, "Therefore my beloved brethren, flee from idolatry. I speak as to wise men; you judge what I say." Why would Paul instruct the Corinthians to flee from idolatry when they knew that idols weren't real? They were just wood and stone, not real gods. So why worry?

The root problem with idols was they represented the religious system of unbelievers that was in direct opposition to Christianity. Paul understood that religious beliefs aren't neutral; and anything that opposes the gospel or seeks to supplant it has its origins in Satan. Paul explains, "So what do I mean then? That a thing sacrificed to idols is anything or that an idol is anything? No, but I say that the things which the Gentiles sacrifice, they sacrifice to demons and not to God; and I do not want you to become sharers in demons. You cannot drink the cup of the Lord and the cup of demons; you cannot partake in the table of the Lord and the table of demons" (vv. 19-21).

Paul makes a big deal here about how we approach our freedom with respect to other religious systems. He says that images of foreign gods are not just only corrupting to those who worship them, but they could have a damaging effect on the walk and witness of Christians as well. That's why he follows the above passage with a warning that although we have freedom in all things, there are things that just aren't profitable for Christians to have or do.

Beyond Paul's warning, we must remember that we're commanded to shun graven images throughout both the Old and New Testament. You see, God gets serious about anyone or anything that claims to usurp Him, and idols are made for that explicit purpose. I'm not at all suggesting that you display your statues because you believe in that religious system. I don't believe that's true. However, because the purpose of a Buddha statue is to advance Buddhism, I would be uncomfortable in continuing to display it. It's akin to an individual who doesn't do drugs wearing a t-shirt with an imprint of a marijuana leaf on it. He may say that he is against drug use, but the message he conveys by wearing the shirt speaks just as loudly to the opposing position.

I'd like to challenge you today to give up those things that represent a challenge to God's supremacy in your life. You can use this as an act of surrender, of sacrifice to Him. Jesus asks us to deny ourselves, take up our cross ad follow Him. Many times this is not the easy thing to do, but God will honor it as an expression of your willingness to put Him first in all things in your life. I believe that giving up the little things now prepares us for bigger challenges down the road.

Please let me know how this goes. I'll be praying for you and your family