Does the hare really chew cud? 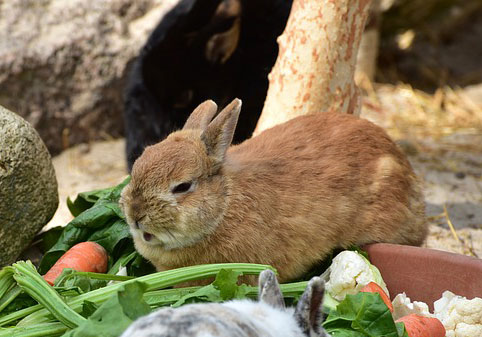 Well, you seem to be willing to "reason together" so let's do it. Even though the subject is so old it's rather boring, let us reason together about a hare who chews its cud... Deut 14. What say ye?

To your question. Deuteronomy 14, verses 6 and 7 read as follows, "You may eat any animal that has a split hoof divided in two and that chews the cud. However, of those that chew the cud or that have a split hoof completely divided you may not eat the camel, the rabbit or the coney. Although they chew the cud, they do not have a split hoof; they are ceremonially unclean for you " This seems pretty straightforward on the face of it. I'm going to make the assumption that you are questioning the idea that a hare chews cud at all. Let's examine the question rationally.

Cud chewers are generally classified as belonging to the order of ruminants- (a sub order of artiodactyls) - and are defined as an "even-toed animal that regurgitates and masticates its food after swallowing. " This means that a cow, for example, will eat vegetation and swallow it. The cow's stomach is divided into four chambers where some of more easily digestible nutrients are absorbed by the body while other more fibrous material is stored in the stomach and then regurgitated. The cow will re-chew this material and re-swallow it so that it can digest it as well.

Rabbits and hares, however, do not have a chambered stomach such as the cow. They also do not regurgitate their food. What they do perform is a function named cecotropy. I will quote the process as cited at http://www.mhhe.com/biosci/genbio/rjbiology/ELOs/ELO45.html

SYMBIOSIS WITHIN THE VERTEBRATE DIGESTIVE SYSTEM

Bacterial Digestion of Cellulose Within Animals - Vertebrates lack enzymes to digest plant material. Some bacteria can do so and are harbored by animals... Rats and rabbits redigest cellulose another way. [They] eat feces and literally redigest them a second time. Efficiency approaches that of ruminants.

Rabbits are sometimes called "pseudo-ruminants"... The rhythmic cycle of coprophagy of pure cecal contents practiced by all rabbits allows utilization of microbial protein and fermentation products, as well as recycling of certain minerals. Whereas the feces commonly seen excreted by rabbits are fairly large, dry and ovoid, excreted singly, and consist of fibrous plant material, cecotrophs are about half that size, occur in moist bundles stuck together with mucus, and are very fine textured and odiferous. They are seldom seen, as the rabbit plucks them directly from the anus as they are passed and swallows them whole. Normal rabbits do not allow cecotrophs to drop to the floor or ground, and their presence there indicates a mechanical problem or illness in the rabbit.

Cecotrophy by Janet Tast, D.V.M. "Cecotropy is the process by which rabbits will reingest part of their feces directly from the rectum. This should not be confused with the term coprophagy (eating fecal material) since rabbits only ingest the soft "night" feces or cecotrophs."

"One may not give much thought to the lazy chewing of the cud that we observe cows doing all the time, but this behavior is analogous to coprophagy. The only difference between cud chewing and coprophagy is the point in the digestive tract at which nutrients are expelled and then placed back into the mouth."

Now, we must also remember that artiodactyls were first defined as a separate order in 1847 by Richard Owen and the behavior of cecotropy was first recognized in 1882. Deuteronomy, however, was written approximately 1500 BC in an ancient Hebrew. It would be intellectually dishonest for someone to claim that a 3500 year old writing is contradictory because it doesn't match with a scientific classification invented only about a hundred years ago. Further, if the ancient Hebrews defined 'cud-chewing" as that process where half digested vegetation was re-chewed by an animal for easier re-digestion ( and that is a very specific and scientific definition), I would say the hare fits here fine.

Whenever someone translates an ancient language or writing, some word for word parallels are not going to be available. Most scholars understand this and accept the cultural backgrounds and meanings for what they are. This is why hermeneutics is a serious field of study in higher education.

I hope this has cleared up any misconceptions you may have had on the accuracy of the Biblical text.